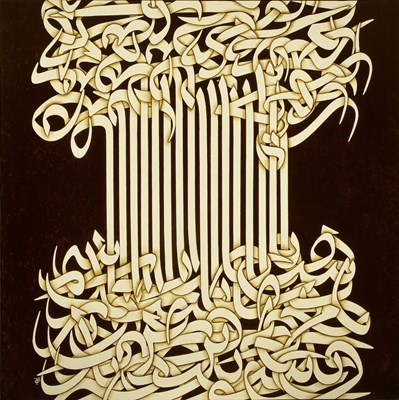 In the Beginning Was the Word 2012

Exhibition of Iranian contemporary calligraphy with the works of Ebrahim Olfat and Azra Aghighi Bakhshayesh, curated by Farah Hakemi.

Azra Aghighi Bakhshayesh (Qom 1968) is the only professional conceptual calligraphic woman artist in Iran and her work draws on the rich heritage of historical writings. At the same time, she breaks the fixed rules of calligraphy and her paintings have an appealing, feminine and unaffected quality. On her large compositions Aghighi creates beauty with words in a non literal way with bold colours and three dimensional lettering.

Ebrahim Olfat (Tehran 1979) is a medical graduate and a member of the Institute of Calligraphers of Iran. His work conjures up images of the sea and waves. His lines have a wave like quality and their movement reminds the viewer of the excitement and confusion of waves crushing on a pebbly shore.

Although the work of these artists seems strikingly different, it is inspired by the same rich cultural heritage. Both have based their imagery on historical writings and are thus reviving forgotten values in Islamic art. Olfat’s work lends its structure from the art of the manuscript, whereas Aghighi is more inclined towards the spiritual elements of calligraphy.